An important part of Bacup's history is the Industrial Revolution - when people stopped making things themselves in their own homes and started to make things in factories.

Bacup's factories were dedicated to one thing - cotton. It was so important it was called 'King Cotton' and brought so much money into Bacup during this time it was nicknamed the 'Golden Valley'. In 1880 there were a whopping 67 cotton mills in Bacup. These mills turn raw cotton from a cotton plant, mostly shipped over from America, into cloth or yarn that could make clothes and sheets.

These smokey chimneys are from Bacup's cotton mills;

These mills were massive, and you can still see some of them today. Being so big, they needed a lot of workers...but workers were expensive, you had to pay them a wage. During the industrial revolution, mill owners found a cheaper way of getting work done...

That's right - they used children, who they didn't have to pay as much and who they could give a clout if they talked back. The life of a child (as young as you!) in a mill was a pretty miserable one, as injuries were common from the dangerous machines used.

Find out about the jobs children did in the mill here:

Here are two sources about children working in the mills from the time; 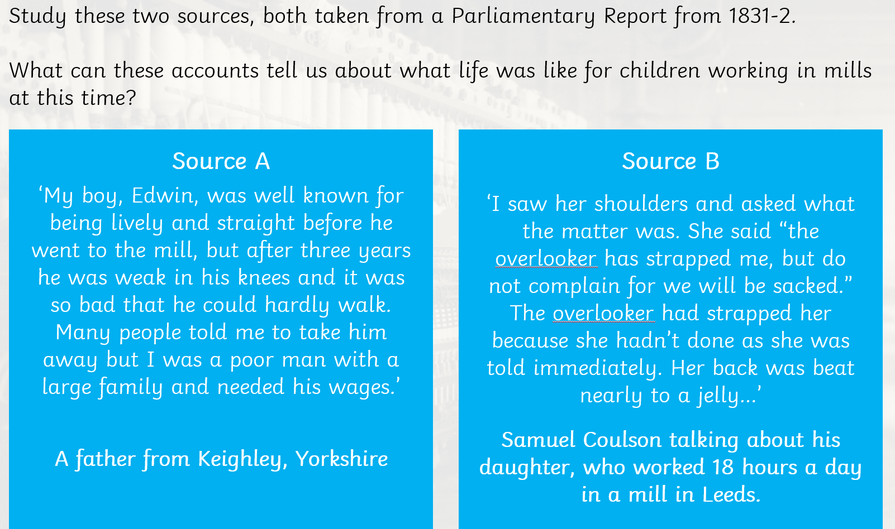 Pretty awful! Imagine you are a child who has gone to work in a mill in the 19th century. Can you write a letter about what jobs you might have to do? When do you start work? When do you finish? What do you think an 'overlooker' does - do they sound like nice people? What health problems might you get?