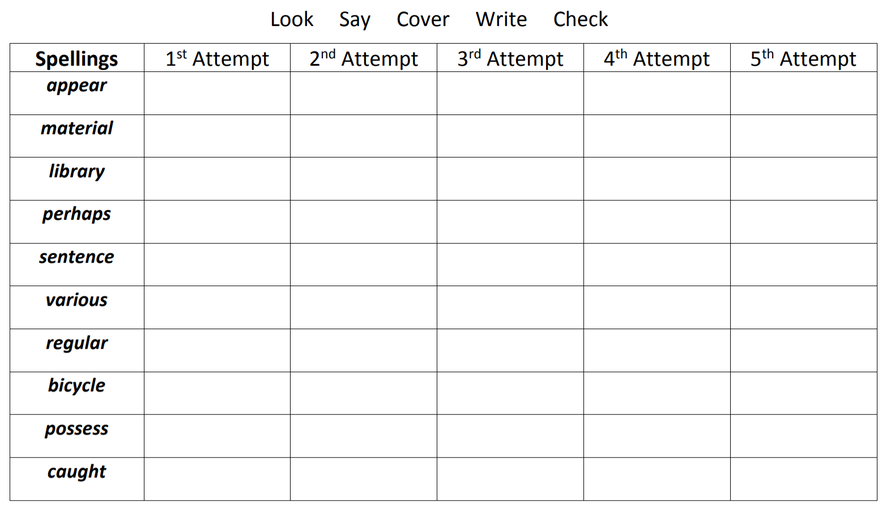 All aboard! Take a ride on the division mental maths train - how many trains can you send off?

Literacy: I am learning to plan an introduction.

It's time to start thinking about planning our own story based on The Iron Man - for that we'll need to think about what characters we'll be writing about. 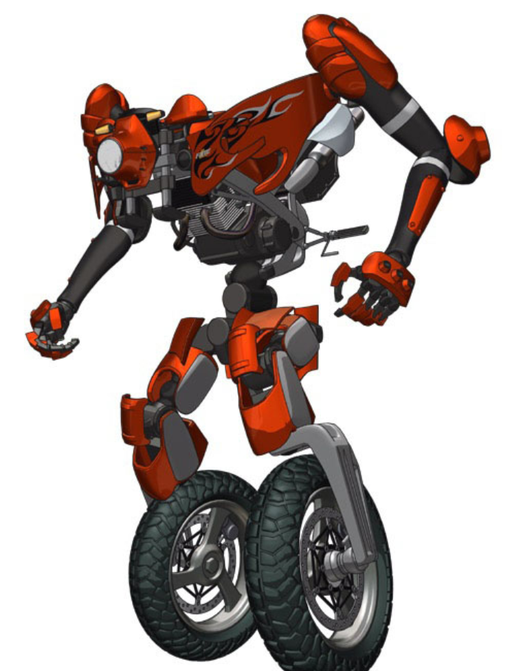 How could I paint the picture in the reader's head?

I might label with 'Enormous, black rubber wheels instead of feet.'

'A blank, still circle for a face.'

Get creative with your robot design! I don't want to see 28 exact copies of The Iron Man!

Once you've designed your character, we need to think about the start of our plan. We're just planning the first 3 parts of our story;

That means we're filling in the blank bit of the table.

- Ramon is dunesurfing in the Sahara desert.

- The Red Robot emerges from beneath the sand.

- He starts scaring away all the shepherd's sheep off into the desert.

- The shepherds decide to trap him by making a hidden tripwire in front of an oasis so he falls in.

That's all we're after

- The robot character comes along.

- The robot character causes a problem.

- Other people in the setting decide to try and sort the problem out!

Remember your setting could be anywhere - I chose a desert, you could have a forest, a small village, a big city, a ski resort, a tropical holiday destination, anywhere you like!

Moving on with division, we're going to look at another strategy that is always useful - partitioning. You probably think of partitioning as just splitting up tens and units, but really it means splitting up a bigger number into any smaller numbers you like. How can this come in handy in division? Let's take a look. 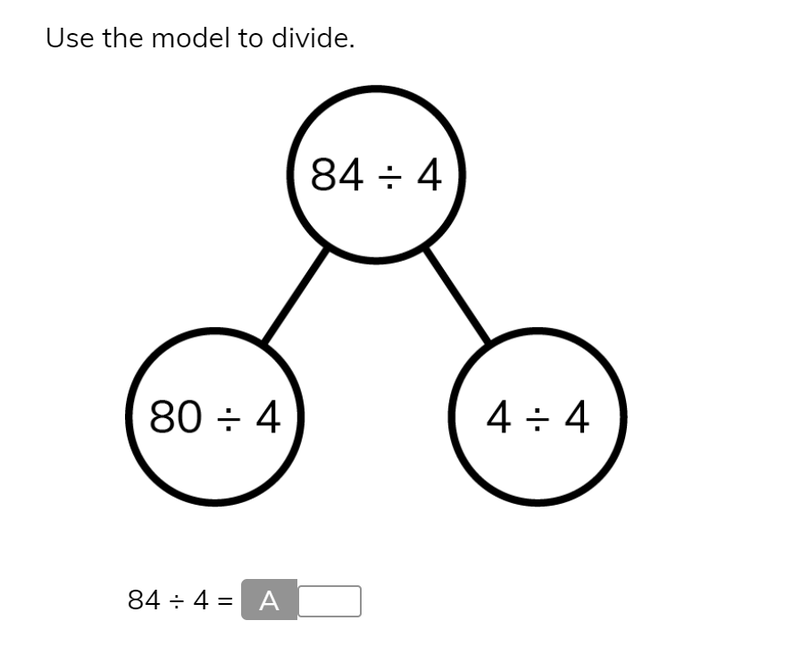 Just add the answers to get 21! 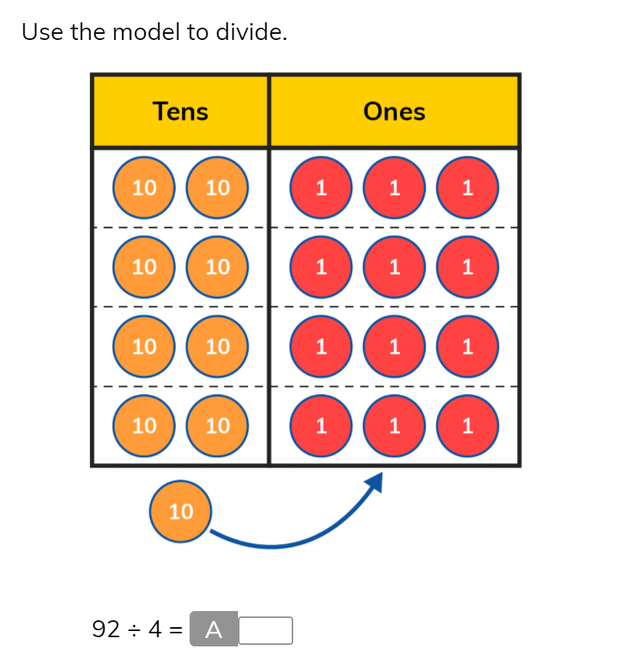 But you don't have to split them up into tens and units - especially when neither are in that times table.

Here's 92 - can we split it up into numbers we know are in the 4 times table? We certainly can - here they've done

But they could have split it into different multiples - even more than 2! You could have 32, 40 and 20, divide them all by 4 and you'd get the same answer.

Log on to Mathletics where you'll find today's task, dividing 2 digit numbers by a 1 digit number.

RE - I am learning about a follower of Jesus.

Last week we looked at how Jesus showed leadership qualities to get his followers. Today, we're going to be looking at one of those followers a bit more closely.

Have a look at this Christian video about the life and times of Peter (who was also called Simon).

On PurpleMash, you'll have a new 2Do with today's date. Can we find 3 good things Peter did as a follower and 3 mistakes he made? The fact that he made mistakes and was still accepted by Jesus as an important follower is seen as a good lesson for Christians that no human, not even Jesus's disciple, can claim that they are completely perfect all the time. 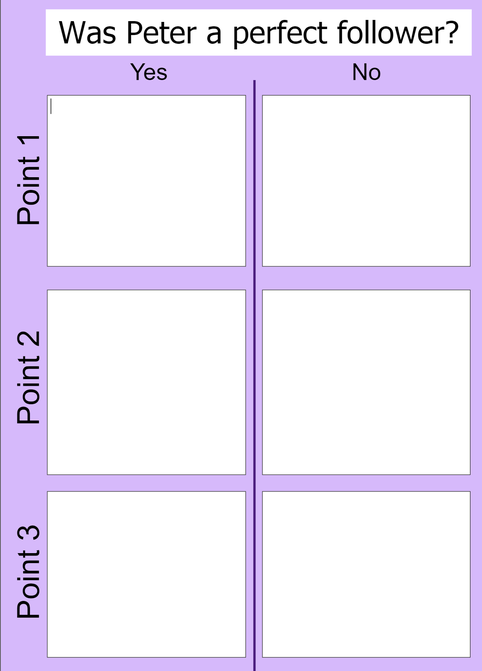 Peter bravely followed Jesus. Here are just a few of the things he did. You can read about Peter's time with Jesus in Matthew, Mark, Luke and John. You can a...

More Christian information about Peter - what made him a good follower? What errors did he make?

We know about Saint Peter from the Gospel accounts in Scripture. Saint Peter, named Simon at birth, was a fisherman from the village of Bethsaida in Galilee. Peter and his brother Andrew were fishermen before Jesus called them to follow him.

Fishing was a common profession on the Sea of Galilee. Fish from this region was considered a delicacy throughout the Roman Empire. Fishing was hard work. Fishermen had to know where to fish and the best method for catching fish. Fisherman had to be strong to sail their boats and haul in their catch. The most common way of fishing was using nets made of flax. Fishermen had to know how to make and repair their nets. They also had to be good businessmen to sell their fish for the best price. Fishermen also had to salt and dry their fish, so they could be preserved and shipped for market.

Like most Jewish boys, Peter would have been taught about the history and customs of his people. He would have learned about Scripture, and the promise that God had made to send a Savior.

One day as the Peter and Andrew were mending their fishing nets, Jesus called out to the brothers. Jesus said, "Come after me, and I will make you fishers of men" (Matthew 4:19). Both brothers left their nets to become disciples of Jesus.

Peter was present during the major events of Jesus’ ministry. One of the earliest miracles recorded in the Gospels was the healing of Peter’s mother-in-law. Also, Peter helped collect the leftover loaves and fish after Jesus fed the crowds. He witnessed the Transfiguration of Jesus, in which he saw Jesus glorified. He took a leadership role among the disciples, sometimes speaking for all of them when questioned by Jesus. He was impulsive, making decisions very quickly. Peter was not an educated man, and he often doubted his own judgment. His faith in Jesus began as a response to the extraordinary events he had witnessed.

After Jesus rose from the dead, Peter was one of the first to see him alive. Peter’s given name was Simon, but Jesus gave him the name "Peter." The name means "rock." Jesus entrusted Peter with a very special task. He appointed him the leader of the Church. Jesus said, "You are Peter, and upon this rock I will build my church" (Matthew 16:18).

Peter received the Holy Spirit with the other disciples at Pentecost. The gifts of the Holy Spirit enabled him to carry out the mission of Jesus to witness to the Gospel. He encouraged the early Christians to spread the Gospel message to people of all nations.

Peter bravely accepted suffering for the sake of Christ as well. He was imprisoned for preaching the Gospel. When he was released, he continued his mission. Then he went to Rome to preach the Gospel there. When a persecution of Christians broke out, Peter was arrested and killed.

Emperor Constantine gave Christians greater freedom of religion, and a great church was built over the grave of Saint Peter. Today, the Basilica of Saint Peter in the Vatican stands on that same spot.